BEAUTIFUL MUSICAL, BETTER THAN I EXPECTED

The actress who played Anastasia had such a beautiful voice, and all the other actors/actress performed perfectly as well, the scene of grandma and granddaughter was quite emotional and I really love the quartet at the ballet.

The entertainer who played Anastasia had such a delightful voice, and the various on-screen characters/on-screen character performed flawlessly too, the location of grandmother and granddaughter was very passionate and I truly love the group of four at the expressive dance.

This show was amazing. Me and my sister grew up with the fox version of Anastasia. We knew the musical was going to be a bit different but it was honestly amazing. The costumes were Incredible, the ensemble and cast were amazing. They kept several of the original songs which brought a bit of nostalgia to our evening. It was definately worth the trip to Toronto!

Delicious musical playing at the Ed Mirvish Theatre in Toronto - full of treats for the eyes and ears. Strong and talented cast. Beautiful and creative set design. Ditto the costumes. And a charming, happy ending. Just what is needed this winter season.

Beautiful production for opening night. I loved everything about it. The voices, stars, music and scenery was beyond gorgeous. I recommend this to anybody who needs winter "pick me up". You will leave humming the songs. Loved it. Two thumbs up.

Amazing overall performance. Dance, songs, dialogue. Prepare yourself to be intrigued by the real story . Amazing cast. The ballet performance was the highlight for me. Laugh, cry, enjoy!

ANASTASIA AT THE FABULOUS FOX

I have seen Anastasia in NYC twice and absolutely loved the production. The Fox version, actors, actresses and scenery did not match the Broadway production but was still a wonderful show. Lila Cohan, as Anastasia has a fabulous voice! My 8 year old grand daughter was mesmerized by the play and loved it. We ate before the show at Stage Left Grille. The location is directly next door to the Fox so a perfect place to eat before a show.

I saw the producion in NYC with its original stars. It's an elegant musical that is delightful for all ages.

I was completely taken out of the moment every time the lead actress playing Anastasia spoke! What was wrong with her annunciation? It was like staccato and impossible to listen to. Great singer but what director let’s someone speak that way? Sets were gorgeous. Two songs were amazing. Just could t stay in the show.

Agree with most that the sets were visually spectacular...alas, the singing was sub-par. Anastasia was energetic, but so harsh/nasally, and the villain so flat, that we had to leave during intermission...(sigh).

I DON’T HAVE ISSUES HERE

Sat in row J left side and couldn’t decipher the lyrics. Screeching followed by some dialogue. If it wasn’t for body language!! I gave it a chance as I admire these actors and what they do but I couldn’t figure out what they were singing through what appeared as noise. So I’m disappointed. Sit further ahead I guess is the solution. Get the sound guys to sit in J and listen to the screeching.

We saw Anastasia at Chicago's Nederlander Theater last night. There were many problems, but let's start with the good things. The visual projections which serve as the scenery were vivid and appealing. The chorus was lively and performed well. Now the bad news: Gleb overacted his heart out (some of his facial grimaces during songs were unintentionally funny). Dmitry and Vlad worked well together and were entertaining. Unfortunately, the lead character is miscast. She has a very good voice, but her tone was hard to tolerate at times and her acting skills were lacking. Zero chemistry with either Gleb or Dmitry. The biggest problem: the musical itself. It just isn't well conceived. The songs are forgettable. Their Disneyfied version of the royal assassinations and the Bolshevik revolution is weird and heartless. A musical written without heart makes it difficult for the performers to give their best. That's what we saw last night.

This production had beautiful costuming and creative use of sets (I especially liked the train scene). The singing voices were good, but the acting - with the exception of the actor who played Vlad, the grandmother, and Vlad’s love interest, Lily - was terrible. There was absolutely no chemistry between the actors who played Anastasia and Dmitry. Such a disappointment! I have directed about 50 shows in my life, and I never would have allowed middle school youth or community theater actors to pretend so inadequately to pour liquid into a cup, nor to drink hot tea as if it were a shot of liquor. These “little things” distracted greatly from what could have been a better production. Not at all the quality I was expecting from a city the size of Denver. The storyline is so different from the Disney movie, too, it added to the disappointment: no Rasputin, minions or Bartok.

The music is very forgettable and the choreography simple. Actors were enthusiastic but seemed to be yelling all the time. At "normal" volume we could understand the lyrics but when they kicked up into high volume the distortion was such that the lyrics were unintelligible. Maybe that is the fault of the sound engineers? If I had to sum up the show in one word it would be 'tedious."

The costumes were all beautiful and the ballet portion was gorgeous. Vlad and Lily were amazing and so entertaining. I don’t like that Rasputin was changed, it made everything more boring. Anastasias singing voice was phenomenal but her acting was horrible and she spoke in a weak shaky voice the whole time which was so annoying. Dimitri did alright although I think the villain gleb had a stronger voice than him.

Where to begin.... The overall presentation of the national tour of Anastasia is meant to leave you drooling over it's beauty, but here's where I believe it fails: The Leading Lady. Ms. Coogan's voice is admirable when she sings, but the lady simply should not have been cast in a speaking roll. Staccato is the best description I can give her delivery. Her lack of emotional warmth toward both if her leading men left me stone cold. Most of her energy seemed to be spent in showing us her pretty profile and navigating her choreography. Put plainly, she is miscast. The two best things about this tour are actor Edward Staudemayer as Vlad, and the ensemble who shine in vocal and dance presentation. The "movie" of a set is stunning and some of the music is memorable. All in all, I was disappointed.

Extremely disappointed. I have seen both performances on and off broadway and recommend they revisit the touring Anastasia’s performance. Instead of leveraging the past and history of the story. This traveling actress portrays a self-righteous, presumptuous appearance. All in all, the touring cast may need a refresh from the original cast to avoid a cost deficit. I’ve never rooted for the main character to be eliminated until now. Her talent in singing is fine but her annunciation and emphasis on words is her death.

We love the theater and go every chance we get. This is the first time we have ever left at intermission. I would have left sooner, but I didn't want to disturb others around me. The setting was absolutely magical. The stage, props, and costumes were amazing. Anastasia had an angelic voice that sent chills through you. That being said, there was ZERO chemistry on stage between characters, the acting portion of the play was horrible, and the songs were so unbelievably boring that it was hard to stay awake. If it wasn't for the few one liners by Vlad I may have snored out loud. (He was great by the way!). Save your money! This one should have stayed with 20th Century Fox's animation department.

BRING SOMETHING TO READ...

As a regular to Cleveland's Playhouse Square, we were looking forward to an entertaining afternoon out with Anastasia. Sadly, I was everything but entertained. I was forewarned it was slow to start. Turns out it is also slow to end. Most actors overacted as such to make their characters cartoonish. All but 3 or so of the songs were merely filler and did not lend anything to the progression of the plot. While I do appreciate classically trained vocals, they seemed misplaced for the characters. Much of the drawn out vibrato was extremely distracting and made it difficult to even understand the actors. I liken the entire performance to a better than average high school performance and ended up reading over my entire playbill awaiting its end. We should have left at intermission.

Seen Anastasia? Loved it? Hated it?

Help your fellow Louisville Theater visitors by leaving the first review. Everyone will love you for it, we promise!

Anastasia leaves you with a profound message - you will never be recognized if you cannot recognize yourself and where you are from.

This is a review of the original Broadway production!

Meet stars from
the cast of 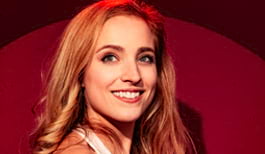 Sound good to you? Share this page on social media and let your friends know about Anastasia at Whitney Hall.