Sorry! You missed Louisville Orchestra - Don Quixote and Other Journeys at Whitney Hall 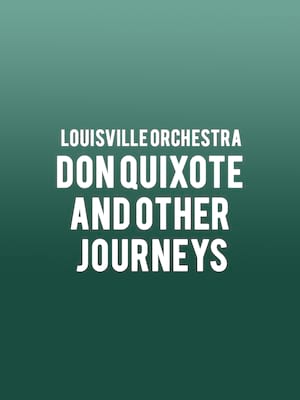 Why See Louisville Orchestra - Don Quixote and Other Journeys?

Join the Louisville Orchestra and special guest conductor Vinay Parameswaran for an evening of sonic storytelling this fall. A perfect antidote to the colder climes of the season, the program offers an escape into other worlds, namely the rolling waves of Mendelssohn's sea-themed Hebrides Overture, the stormy physical, emotional and mental voyage of Anna Clyne's abstract Night Ferry and the fairytale humour Strauss' Don Quixote.

German romantic era icon Richard Strauss was not the first to set Cervantes' immortal tale to music, but his Don Quixote stands the test of time as one of the most beloved adaptations thanks to its classical rendering of the Knight of Sorrowful Countenance and his multi-faceted personality. Through the medium of theme and variations, the harmonic language Strauss used was excitingly avant-garde for its time and rich in story-telling -  even the instruments take on whole characters - the virtuosic cello highlights the titular anti-hero, whilst Sancho Panza is brought to life by a solo viola with accompaniments by clarinet and tuba.

Sound good to you? Share this page on social media and let your friends know about Louisville Orchestra - Don Quixote and Other Journeys at Whitney Hall.