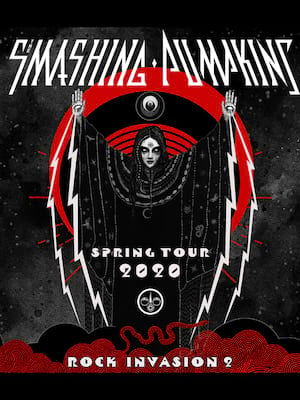 Billy Corgan's Smashing Pumpkins created some of the most iconic tracks of the 90s, fashioning an amalgam of progressive rock, heavy metal, goth rock, psychedelia, and dream pop. Don't miss them live in 2020 as they take to the road on the Rock Invasion tour 2, a 'sequel' to their rock-centric 1993 jaunt in support of their breakthrough 'Siamese Dream'. Promising a heavier look into their back catalog, Corgan told Rolling Stone: "This tour won't be for those faint of heart and will certainly echo the dynamic modes in which we built our live reputation."

Of all the major alternative rock bands of the early '90s, the Smashing Pumpkins were the group least influenced by traditional underground rock. Lead guitarist/songwriter Billy Corgan fashioned an amalgam of progressive rock, heavy metal, goth rock, psychedelia, and dream pop, creating a layered, powerful sound driven by swirling, distorted guitars. Corgan was wise enough to exploit his angst-ridden lyrics, yet he never shied away from rock star posturing, even if he did cloak it in allegedly ironic gestures. In fact, the Smashing Pumpkins became the model for alternative rock success - Nirvana was too destructive and Pearl Jam shunned success.

One of the best concerts i've ever seen in my life! Billy Corgan was at... more

Wow, what an amazing show on August 28th at the Golden 1 Center in Sacramento.... more

Sound good to you? Share this page on social media and let your friends know about Smashing Pumpkins at Louisville Palace.