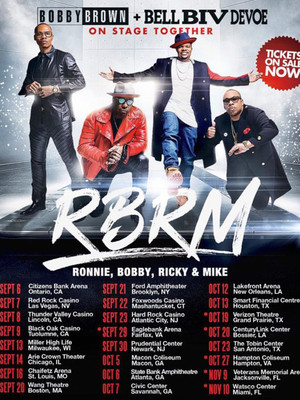 After a one-off show in Amsterdam former New Edition members Ronnie, Ricky and Micky (now Bell Biv DeVoe) reunited with former bandmate Bobby Brown and as they say, the rest is history! After a highly popular mini-series documenting the rise of New Edition in 2017, the quartet decided to reunite under the name RBRM! Join the original bad boys as they bring you another full-throttle concert showcasing the group's many, many hits!

Rising to stardom in the 80s, New Edition enjoyed huge success with hits such as 'Candy Girl', 'Cool It Now', and 'Mr. Telephone Man'. After going their separate ways, with new members coming and going, Ronnie, Ricky and Mike formed Bell Biv DeVoe. Now the 80s supergroup combine their force to bring their various hits, from New Edition days to Bell Biv DeVoe, to bring you the ultimate party!

RBRM were excellent they put on an awesome performance. We never sat... more

Sound good to you? Share this page on social media and let your friends know about RBRM: Ronnie, Bobby, Ricky and Mike at Louisville Palace.