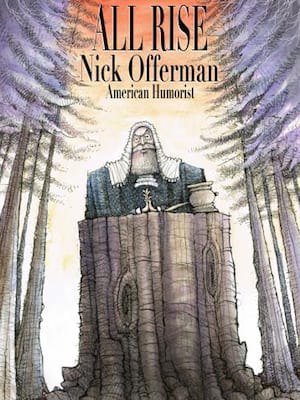 All rise for the American humorist

Ron Swanson in the Flesh

Nick Offerman is taking his fantastic mustache on the road again. He'll be taking readers and fans behind the scenes of his life both on-screen and off, as well as Offerman Workshop, his famous woodshop nestled in the heart of Hollywood, where the Parks and Recreation star deals in creating handcrafted items, ranging from delicate ukeleles to enormous canoes! Don't miss him live this year on the All Rise tour, where he'll be musing on misadventures in sawdust, fashion tips for woodworking, sharing mirth and dealing in absolute tomfoolery.

Nick Offerman is a man of many talents - an actor, a comedian and a passionate woodworker. Best known for his role as Ron Swanson in Parks and Recreation, Offerman became involved in Chicago's improv comedy scene early on in his career and hasn't lost touch with his 'live on stage' talents or persona.

The show isn't your typical stand up show. It is more of a throwback humorist... more

This show was the best comedy show I have ever seen. Nick Offerman was... more

Sound good to you? Share this page on social media and let your friends know about Nick Offerman at Louisville Palace.