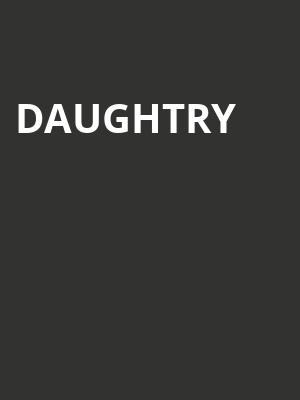 Daughtry are back on the road!

Alternative rock band Daughtry formed in 2008 after vocalist Chris Daughtry made it to the finals in the fifth season of American Idol. The show proved to be the perfect platform for the North Carolina native, With several studio albums under his belt he's showing no signs of slowing down!

Though he didn't win the televised competition, Daughtry's impressive vocal range still earned him a record deal with RCA Records, and the band's self-titled debut album sold more than a million copies after just five weeks of release, becoming the fastest-selling debut rock album in history. The singles "It's Not Over", "Home" and "Over You" each earned the band a top-five spot in the US Pop 100 charts. Since the release of their fifth studio album 'Cage To Rattle' in 2018, the hard-working rockers are back on the road with a vengeance for the foreseeable future.

What an awesome concert that almost wasn’t one! Two hours prior to concert... more

Loved Daughtry. The band had great energy and loved the crowd singing... more

Sound good to you? Share this page on social media and let your friends know about Daughtry at Louisville Palace.