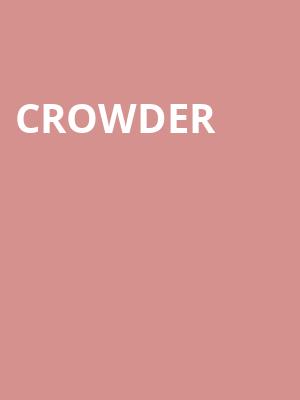 Grammy-nominated, multi-instrumentalist American Christian rocker, David Wallace Crowder, hitting the road on a North American tour! This tour will see Crowder playing all your favorite material from both his solo albums, although he's stated leaving room to switch things up on his shows!

Crowder started his career as the frontman of the David Crowder band in 1996 for 16 years. After leaving the band he went on to pursue a solo career, and after two albums has now gained a reputation as one of the more adventurous Christian rockers. Both albums topped Billboards magazine's Christian Album Char and also debited in the top 15 of the top 200 album charts.

Make sure you don't miss the incredible Crowder when he hits your town!

Saw him in KS ;last year & he was phenomenal!! He rocks you right to GOD's... more

Sound good to you? Share this page on social media and let your friends know about Crowder at Louisville Palace.