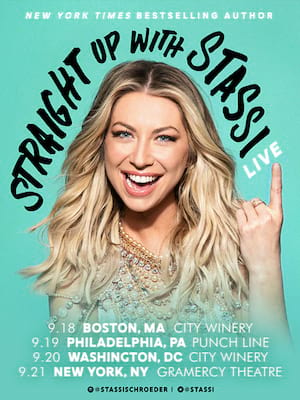 Straight Up with Stassi

Everyone's favorite authority on basic, Stassi Schroeder, is taking her hit podcast Straight Up With Stassi on the road for the first time ever.

Why See Straight Up with Stassi?

Join Stassi on the Ultimate Girls Night In

Stassi Schroeder is a woman with many talents. The 31-year old powerhouse is a reality television star, fashion blogger, podcast host, model and author. These are just some of the talents that she'll be putting to use on her country wide tour, kicking off this October. With a host of special guests joining her, Stassi will take to the stage and discuss everything from pop culture to relationships to celebrity gossip.

Stassi is best known for her role on Bravo's Vanderpump Rules and has also appeared as a contestant on TV game show The Amazing Race. Earlier this year, Stassi released her book Next Level Basic which became a New York Times bestseller. Join her for a night of unexpected laughs.

Seen Straight Up with Stassi? Loved it? Hated it?

Sound good to you? Share this page on social media and let your friends know about Straight Up with Stassi at Brown Theatre.